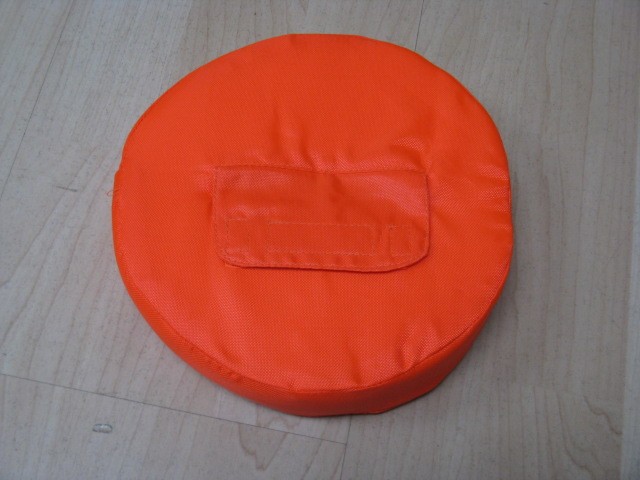 Well, there's nothing quite as fun as burning off some steam in a wide-open field or inside the school gym. Whether you want to play Catch with a group of friends, enjoy a rip-roaring game of Tag, or just have a contest to see who can throw something the farthest, you'll be delighted at how our Beeping Foam Disk makes it possible for blind players to join in the game!

This one-of-a-kind toy for all ages is seven and a half inches in diameter and an inch and a half thick. In the center is a Velcro-sealed compartment which securely holds the beeping module in place. By simply ripping open the flap and flicking a switch, you can turn on the "beeper", which is loud enough to comfortably hear - but not so loud that it'll produce confusing echoes or disturb sighted players. And since the disk is made of light-weight plastic-covered foam, it's nice and easy to throw - and it offers enough protection to keep the beeper beeping for a long time.

You'll be amazed at how blind kids can finally play all those catch and toss games with our Beeping Flying Disk. If Catch is just the thing, keeping track of the disk as it flies through the air will be no problem - just as finding it after it lands will be entirely doable. To play Tag, simply have the person who's It carry the beeping disk around; that way, EVERYONE will know where the scary It is - so they can run away as fast as they can. Basically, our Beeping Flying Disk really levels the playing field, so to speak! (Uses 1 AA battery - not included.)

Directions for the Beeping Foam Disk From Future Aids, The Braille Superstore.

In the center of your new Beeping Foam Disk on the back, you will find a Velcro-sealed compartment. Simply pull open the flap and remove the small plastic box inside. This unit, called the BeeperBox, is what makes this foam disk beep.

The BeeperBox takes a single AA battery. On the opposite end of the rectangle from the on/off switch, you will find an indented pull-tab which you can use to slide off the compartment lid. Once the battery is inserted, simply line the flat end of the lid up with the depression on the side of the unit with the on-off switch, then press the lid into place on the other end. With the battery in place, slide the beeper back into the compartment, secure the elastic, and close the velcro flap. Let the fun begin!

Flicking the switch on the box will immediately cause the disk to emit four quick beeps. The unit will pause for just shy of a second, then beep again. It will beep continuously until you turn it off, or it runs out of power.

Have a group of friends spread out over a clear field and pass the disc to one another. Have everyone line up and see who can throw it the farthest. Have the best thrower pitch the disk for the players, and see who can get there first. The list goes on. No matter what game you play, our Beeping Foam Disk makes sure everyone has an equal chance to participate - whether they can see or not.

(From the Sporting Goods shelf.) 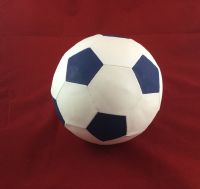 Beeping Foam Ball
Temporarily out of stock. Usually ships in Mid December.
Foam Ball that Beeps, Whether It's Moving or Not
Item Number: 1180
$24.95
Tell Me More 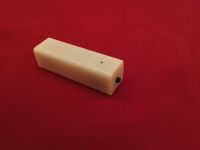 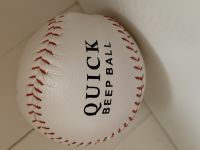 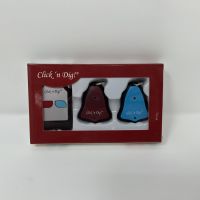