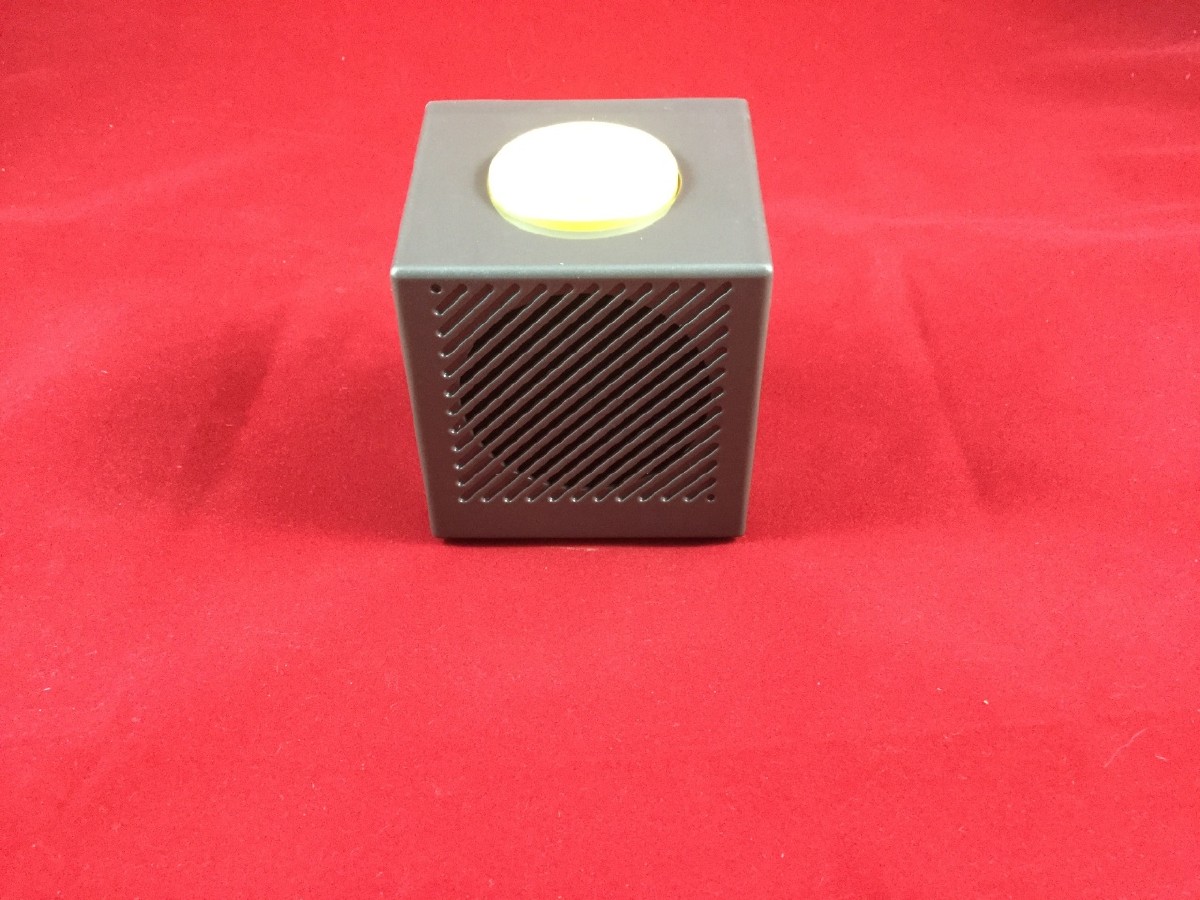 This clock was designed over in England, where nobody seems to settle for anything less than the absolute best. And, mark our words, it shows!

Our best-selling, easy-to-use cube-shaped talking alarm clock boasts a clear, natural-sounding British male voice. On top of the clock is the one-inch-in-diameter TIME button - which, when pressed, instantly reports the time: "It's 8:32 PM." The speaker on the front of the clock is over two-and-a-half inches square, meaning that it's easy to hear the clock's speech - even if your hearing isn't what it used to be. There are four sturdy rubber feet at the bottom of the clock to prevent it from sliding around on your table or nightstand, plus the clock's weighty feel gives it a well-designed, rugged appearance.

But that's not all. There are absolutely no setting buttons exposed anywhere on this clock - which means ... no buttons to bump and accidentally change the time, shut the alarm off, and so on. To set up the clock, simply flip open the battery door (don't worry - the batteries are safely tucked away inside a cartridge so they won't fall out). Above the battery compartment - behind the door - you'll find something unheard-of on a talking clock - an actual rotary volume dial that can adjust the speech output from whispering quiet to almost shouting loud. And the square- and circle-shaped buttons are used to set the time and alarm, turn Hourly Announce on or off, etc. You can also choose your favorite alarm sound from five practical and fresh new selections: cuckoo, low bong, high bong, wind-up bell, and fast beep.

There's still more noteworthy information pertaining to our Talking Cube Clock. All of the function and speech buttons are contrasting - making the clock easier for someone with low vision to use. When setting or adjusting the clock's settings, audible prompts guide you step-by-step through the entire process - making this clock 100% accessible to totally blind individuals. A Snooze alarm is also present, which sounds the alarm for one minute, then snoozes for four more minutes.

In short, if you're in the market for a talking clock that'll withstand the test of time and be practical and easy to use all the while, this baby is the obvious choice. (The clock operates on four AA batteries, which are supplied in the box!)

Directions for the Talking Cube Clock From Future Aids, The Braille Superstore.

General description
This simple alarm clock announces the time at the press of a button in a natural male English voice and all mode settings are spoken. Clock features an optional hourly announcement, five alarm sounds and a volume control.

Orientation
A large round yellow button is situated on the top of the clock. This is the Talk button, which when pressed announces the time.

There are four round non-slip feet situated on the bottom of the clock, which prevent the clock from moving when positioned on a flat surface.

The large speaker grille is situated on the front of the clock. This has a ridged texture.

A removable cover forms the back of the clock and there is a small clip towards the bottom of this side, which when pushed up enables you to remove the cover to reveal the clock's controls and battery compartment.

With the cover removed you will notice a series of controls within the recessed top section. The square button on the left is the Mode button, which when pressed takes you through all of the mode functions (these are listed in full further on in these instructions).

The round button on the right is the Set button, which when pressed in the mode settings changes the options.

Below these controls is the battery compartment. The plastic holder, contained within the compartment, holds the four batteries, two on each side.

The four AA batteries should each be inserted with their negative (flat) ends positioned against the springs in the battery holder. Ensure each battery is fitted securely into the holder and then put the holder back into the battery compartment by re-attaching the holder to the connector pad noting the negative connection on the holder should align to the positive connector on the pad and vice-versa with the other connectors.

Please note: After inserting batteries, you will need to set the time before re-attaching the battery cover.

Using the product
Setting the volume
Press the Talk button on top of the clock to hear the time announcement. You can then increase or decrease the volume by using the rotary dial on the back.

Setting the clock
To set the time and/or alarm, or to activate the optional hourly announcement, follow these instructions.

The square Mode button is used to enter the menu. To change the settings of the function selected press the round Set button. At any time during set up you can press the large Talk button to return to current time announcement mode or you can simply proceed to the next function by pressing the Mode button once more.

As you press the Mode button the menu is announced in the following order:

Choosing the alarm sound
In the next mode the clock says "alarm" followed by the default alarm sound. Choose from the following alarm sounds: a two-tone alarm, a mechanical bell sound, a horn sound, a cuckoo and a beeping alarm by pressing the Set button.

Alarm reminder
The clock's alarm will sound for one minute at the time set and will then pause for four and a quarter minutes. This process will be repeated five times and then stop, unless you cancel it by pressing the Talk button on the top of the clock.

Alarm check
To confirm the alarm status, simply press the Set button in the current time announcement mode. The clock will announce the current alarm settings - alarm sound, alarm on/off and the alarm time. This action will not change any of the clock's settings.

Re-setting clock
Reset the clock's settings to default by removing and re-inserting the batteries.

(From the Talking Clocks shelf.)

Fatal error: No other related products found for class ButtonTime